Washington Celis, a Master Degree Black Belt and Provincial Chief Instructor, is a pioneer in the formation of the provincial governing body in Saskatchewan, Canada. He has studied TaeKwon-Do since 1977 along with some other forms of martial arts. He is also a black belt in Hapkido and has gained provincial, national and international experience over the years, and became a TaeKwon-Do instructor in 1983. He has earned black belts in WTF, GTF and ITF, and he is currently an internationally certified black belt and examiner with ITF. He has taken several instructors courses with renowned Grand Masters and he is also a certified coach in accordance with the National Coaching Certification Program. He has also studied engineering in Chile, Argentina and Canada, and he graduated from the University of Saskatchewan in 1982. He presently works as a manager in the Pipeline Regulatory Section for the Saskatchewan government.

Master Celis currently teaches Taekwon-Do in Regina, but he also conducts seminars all over the province and Western Canada. His main goal is to promote TaeKwon-Do and achieve excellence through the mental, physical and spiritual development of each and every student. He along with his brother have developed a training program that will guide the student step-by-step from a novice to a black belt within a time period of approximately five to seven years of regular training. This training program will effectively enable the students to grasp the fundamentals of TaeKwon-Do. In the short term, the student will learn the key ingredients for success such as desire, discipline and dedication, and in the long term, the individual will build a constructive character, which will enable him/her to live in peace and harmony with other people.

The Celis Taekwon-Do Handbook was published primarily to help the Taekwon-Do student to advance through the ranks from white belt to 2nd Degree Black Belt. He encourages anyone to read the manual carefully, as it will give the student valuable insights into the organization to which he/she belongs and all testing requirements necessary for advancement in Taekwon-Do. Over the past three decades, he has become convinced from his experience, observations and tangible results that Taekwon-Do is far more than a Korean form of self-defense. He has seen how regular Taekwon-Do training can transform timid or shy people, and those completely lacking in self-discipline, self-respect or self-confidence, into motivated high-achievers. He testifies that Taekwon-Do has helped him tremendously through the course of his personal life, and he also believes that all practitioners, regardless of gender, age, race or religion, can gain many benefits from Taekwon-Do.

Our mission is to make our students more successful in life through their practice of Tae Kwon Do. Our academy is an educational institution where our main focus is to teach character development and life skills. 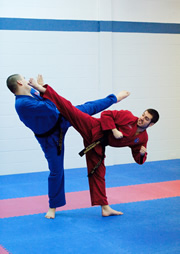 We do this by teaching martial arts as a complete discipline (mind, body, spirit), which in addition to developing happier, healthier and safer people, we encourage the formation of high personal standards and respect for fellow men and women.

Through our practice and teaching, we strive to produce individuals who are successful, positive, respected and contributing members of society.